It has been a while since the last post, so I thought I'd share an update on my China Basin project.

A few weeks ago, I had a few hours to play with the Epilog laser cutter at TechShop San Jose.  My first attempts at laser cutting after a year or two away from the machine served as an opportunity to re-learn the practical limits of laser board on the heavily used machines.

I tried cutting some of the superstructure and gears, but ended up with parts that were burned and fragile— I had forgotten to consider the thickness of the laser beam itself. 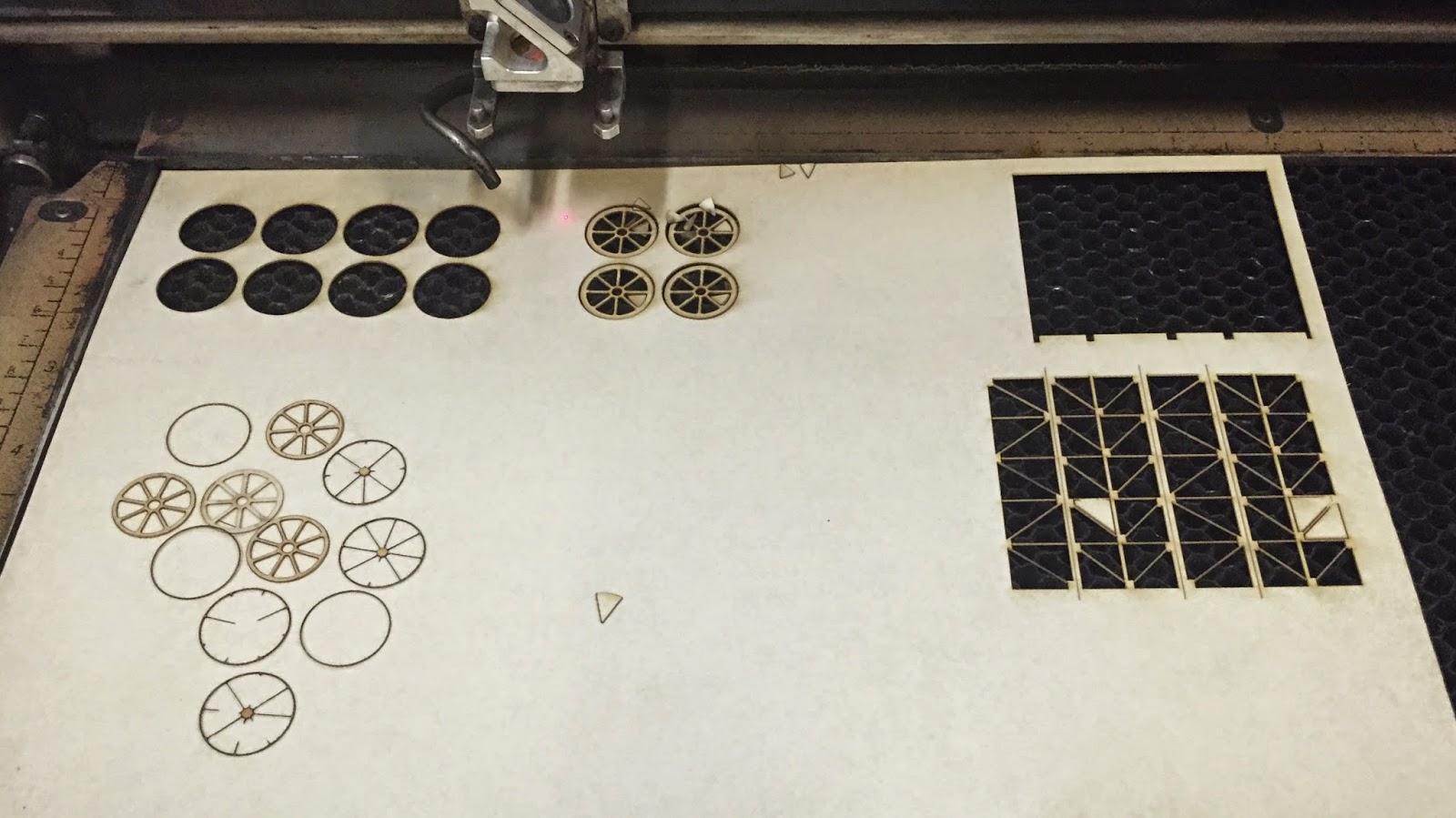 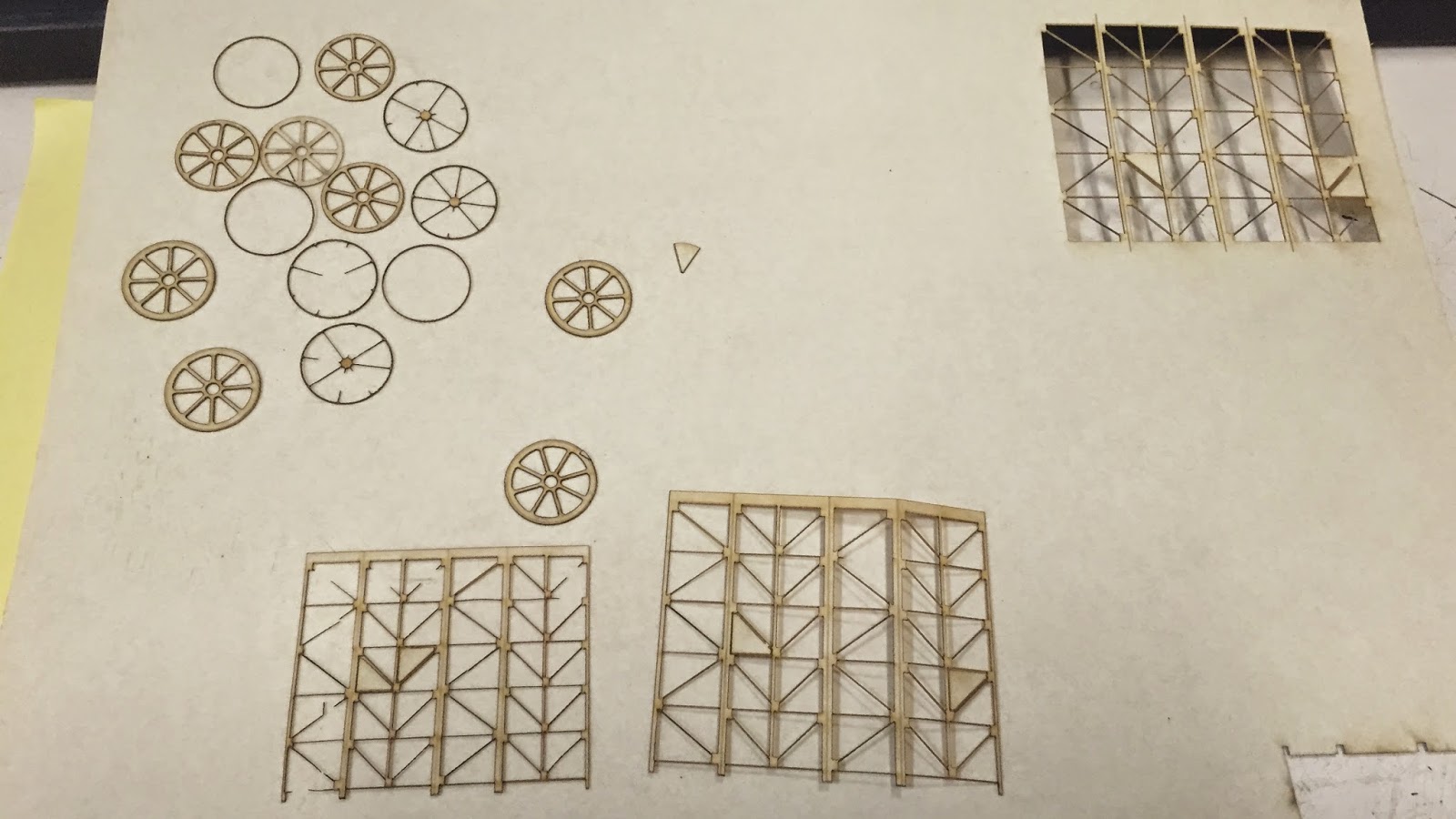 After tweaking the CAD a bit, I increased some of the dimensions, ran a few more cuts, and ended up with a pile of laserboard widgets to play with.  I had to head home, as my two hours of reserved time were over. 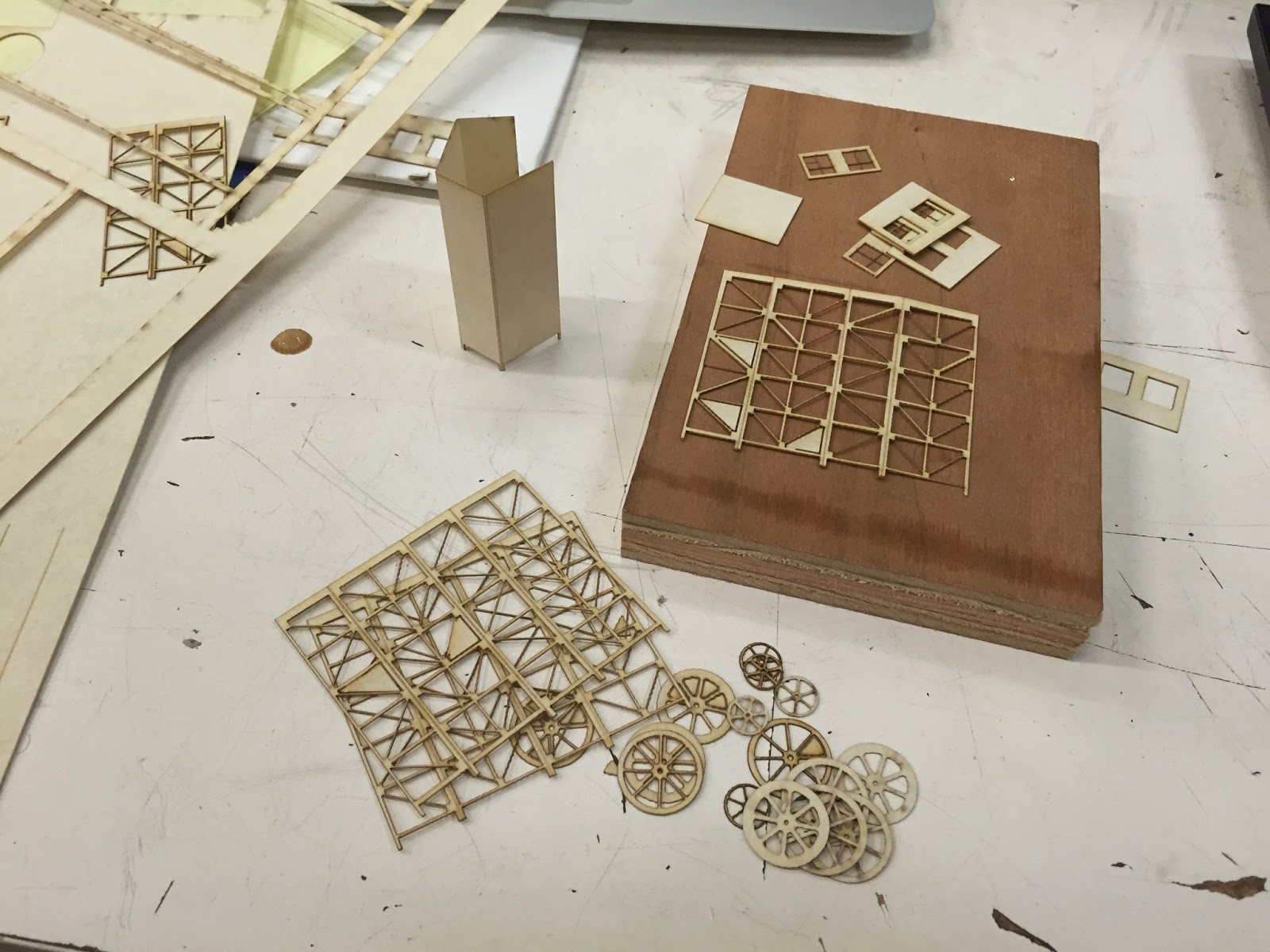 After playing with the parts, I had decided that there was no good way to build a "fold-up" model of the gantry crane.  I also had my doubts about the strength of the resulting construction, as this would eventually end up on a Free-moN module.

A few days later, resigned to the concept that I may need to abandon the laser, I started playing with Plastruct parts. 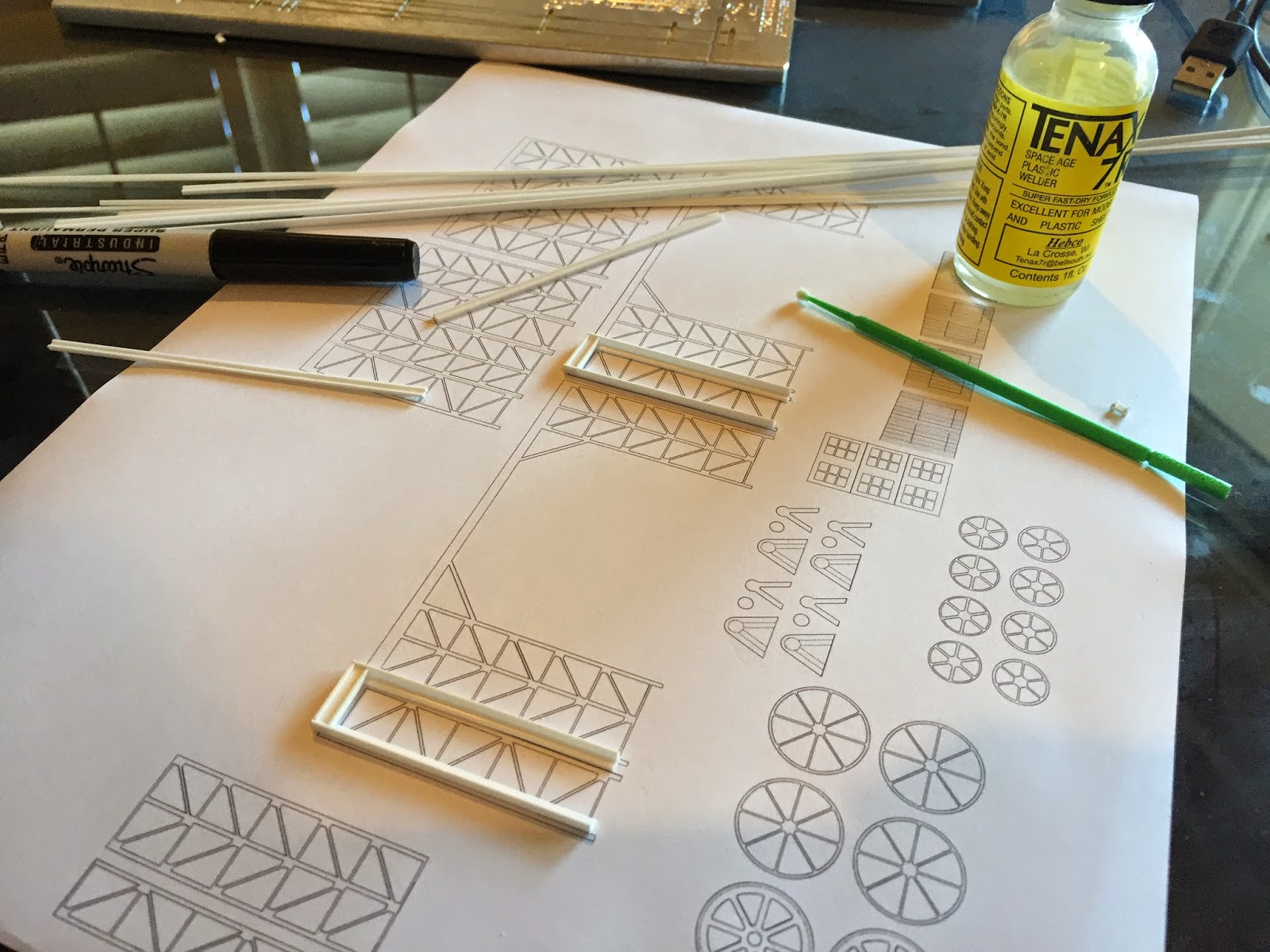 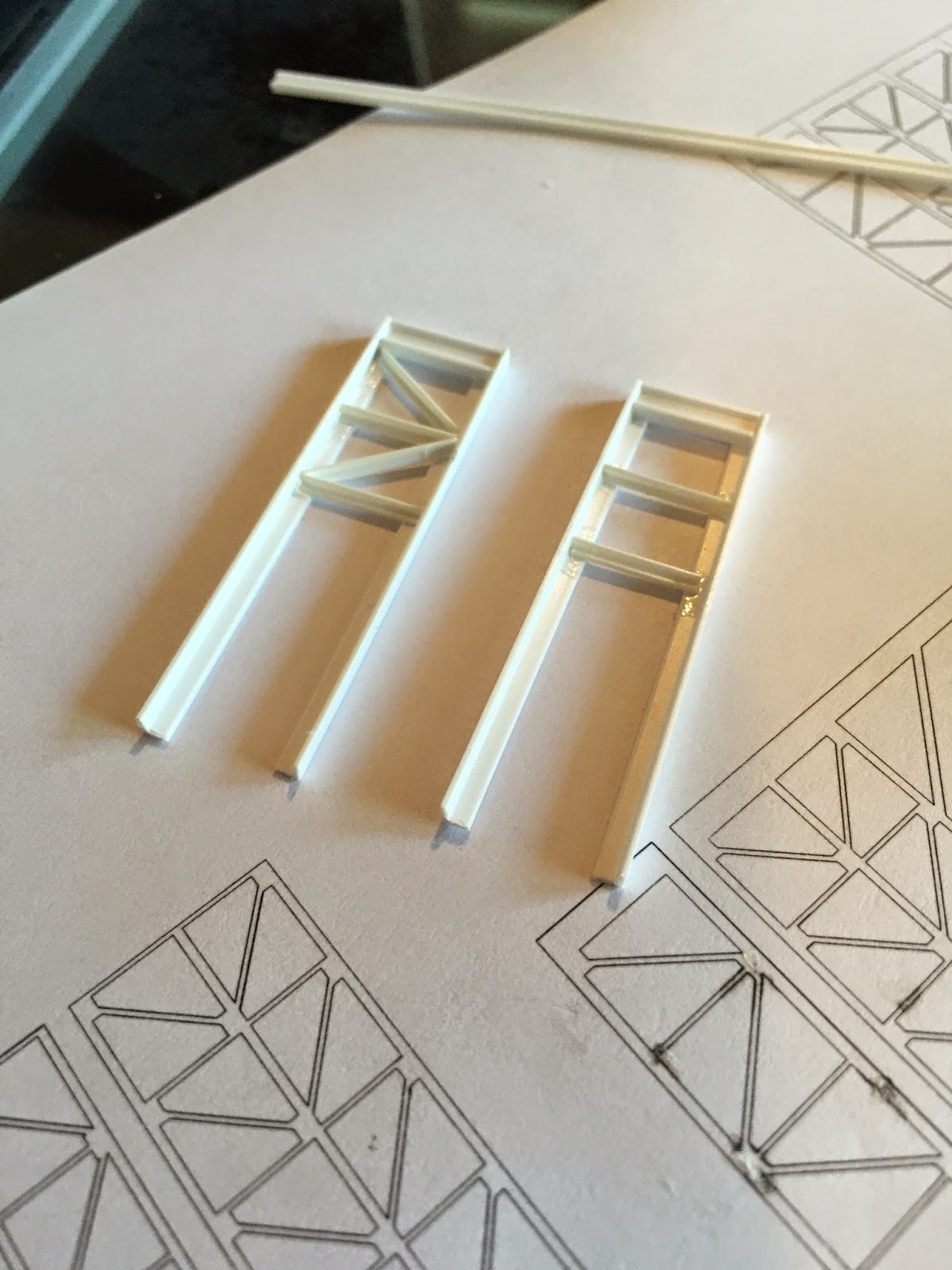 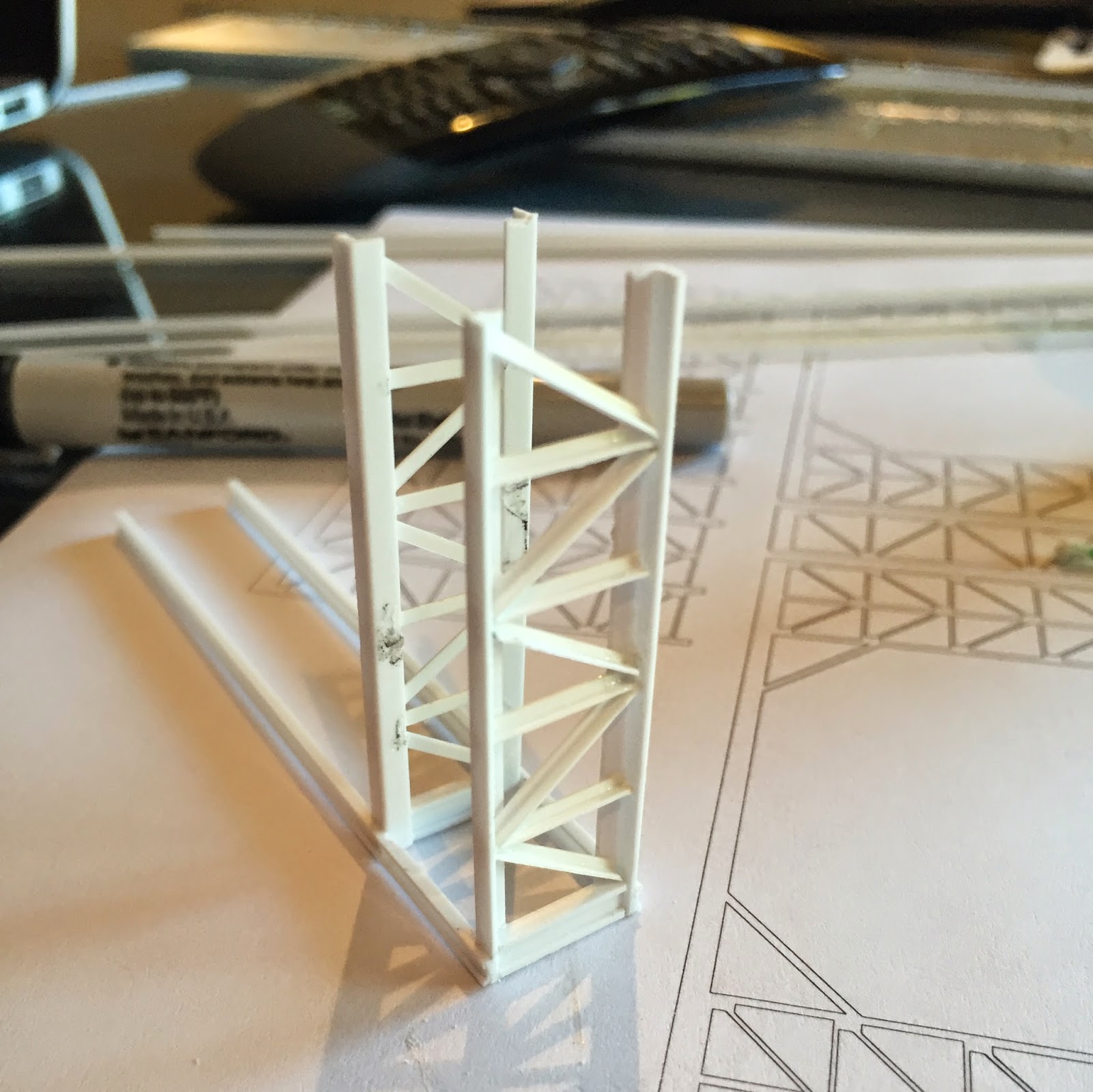 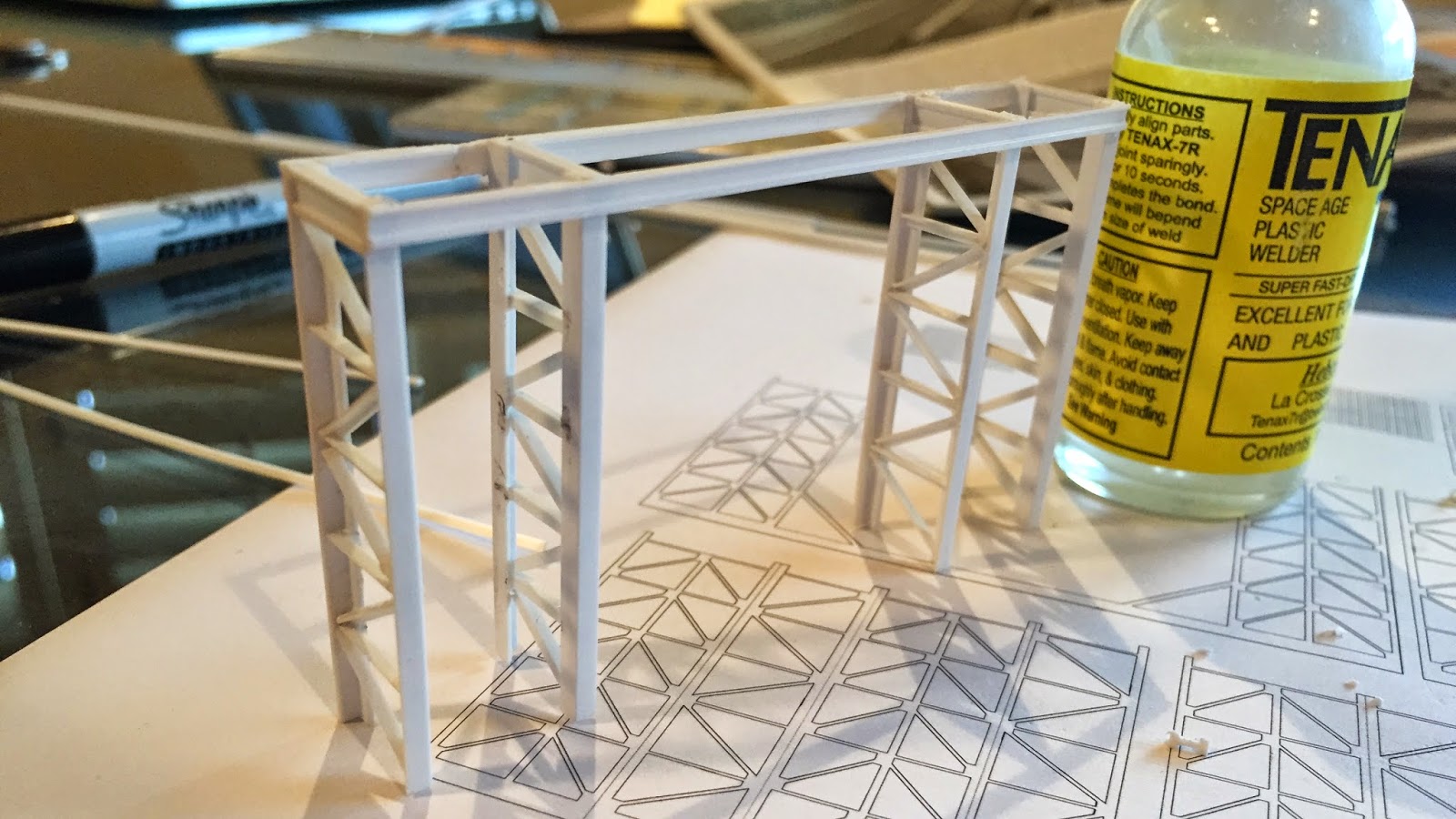 While the model was sturdy, it looked a bit too "beefy" for my taste— as I was starting to consider building the latticework on the front face, I stumbled upon another idea.  I had posted the work in progress to the Model Rail Radio Facebook group, and Jimmy Simmons said it looked good, but he'd stick to his laser.  Then it hit me— why not combine the two techniques.

As part of the earlier laser cutting attempts, I ended up with a few individual pieces that might work: 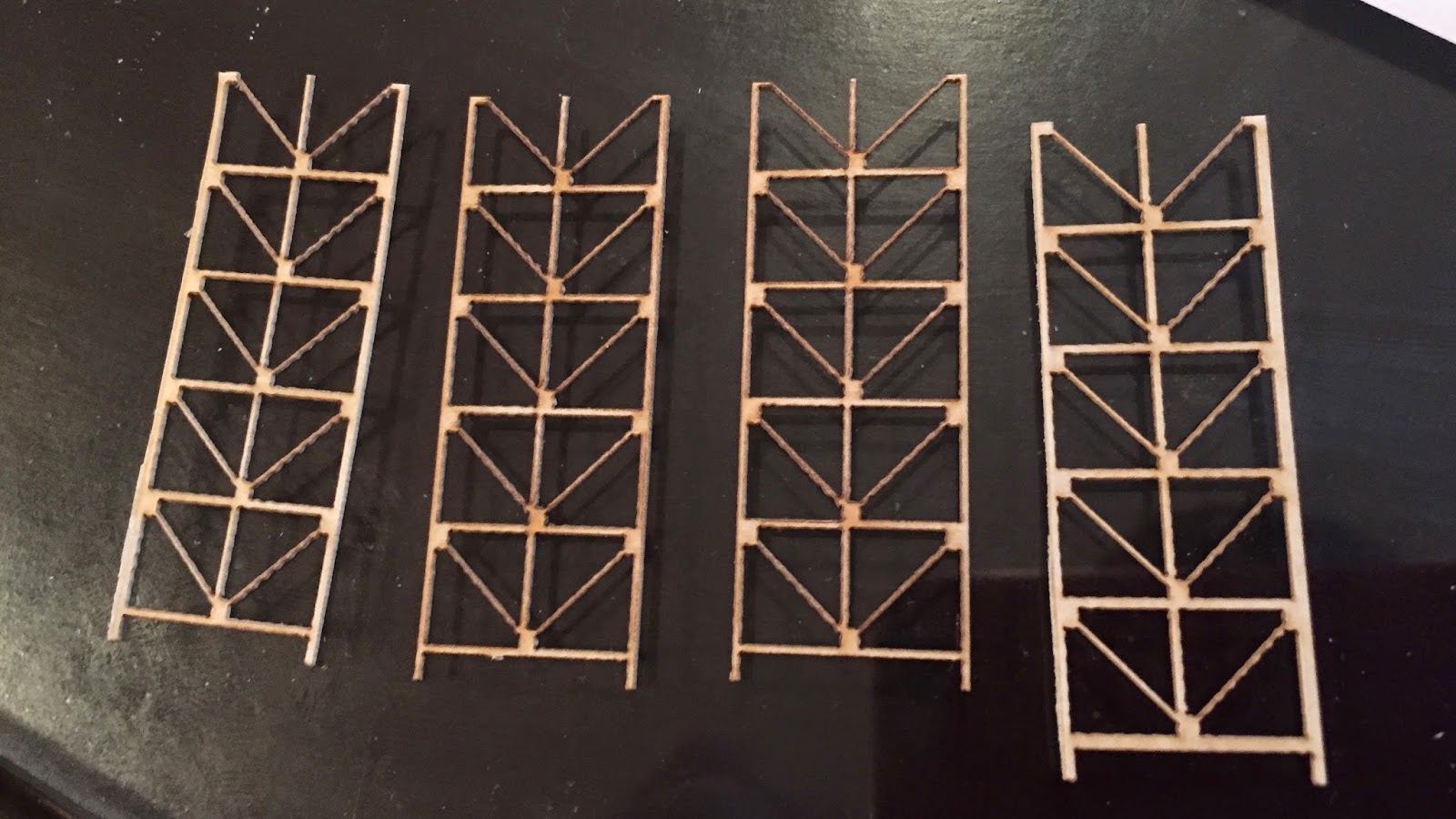 As a quick hack, I decided to glue up the laser cut faces to the plastic, and the results were quite pleasing to me: 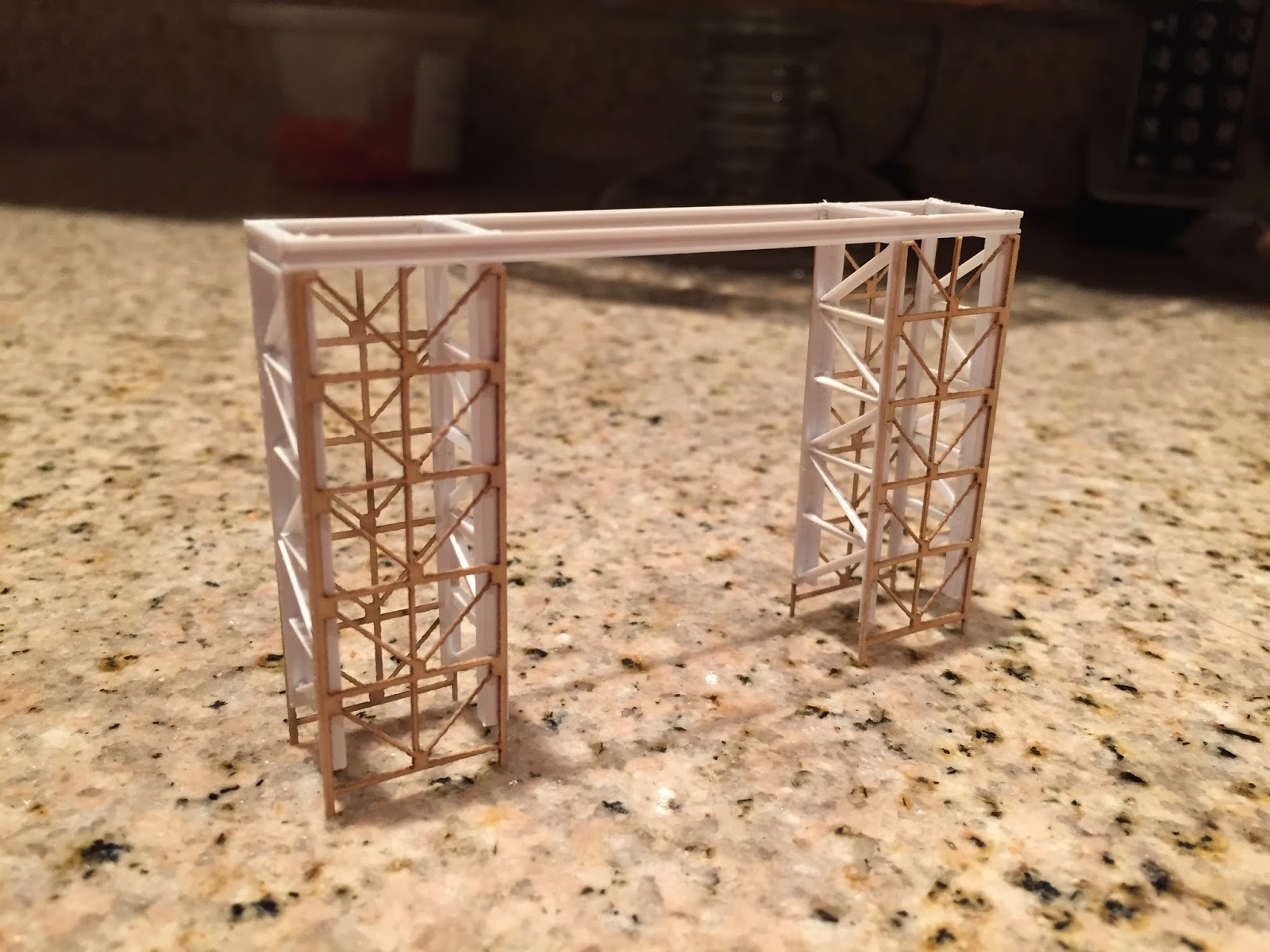 I was psyched— a few weeks of the project sitting on the back shelf inspired me to get back into it.  The next step was to try out the gluing up multiple laser cut parts into the large pulleys used at the top of the gantry: 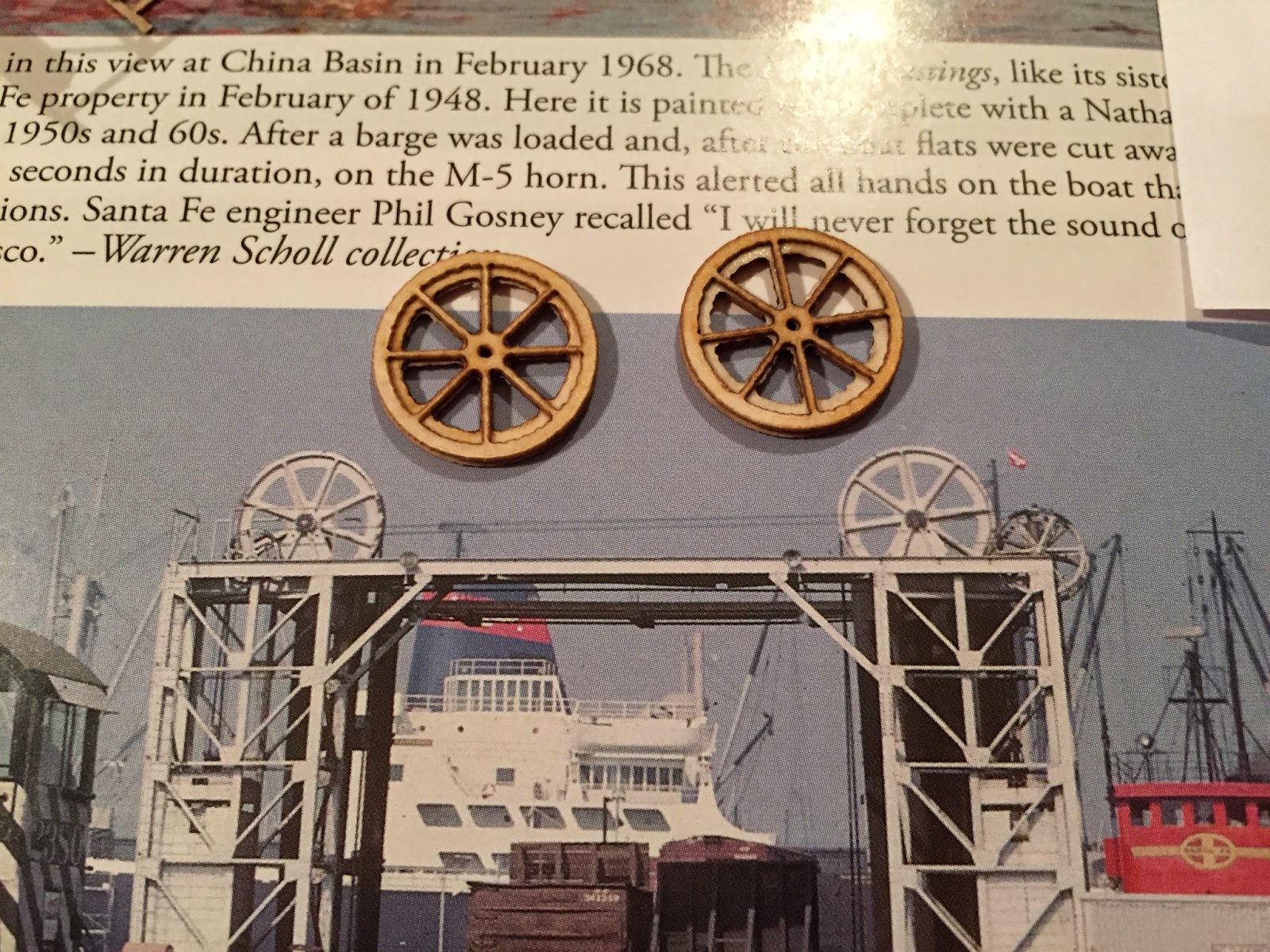 Some good progress on the difficult bits inspired me to get back to building more pilings, and the test fitting the works on the dock: 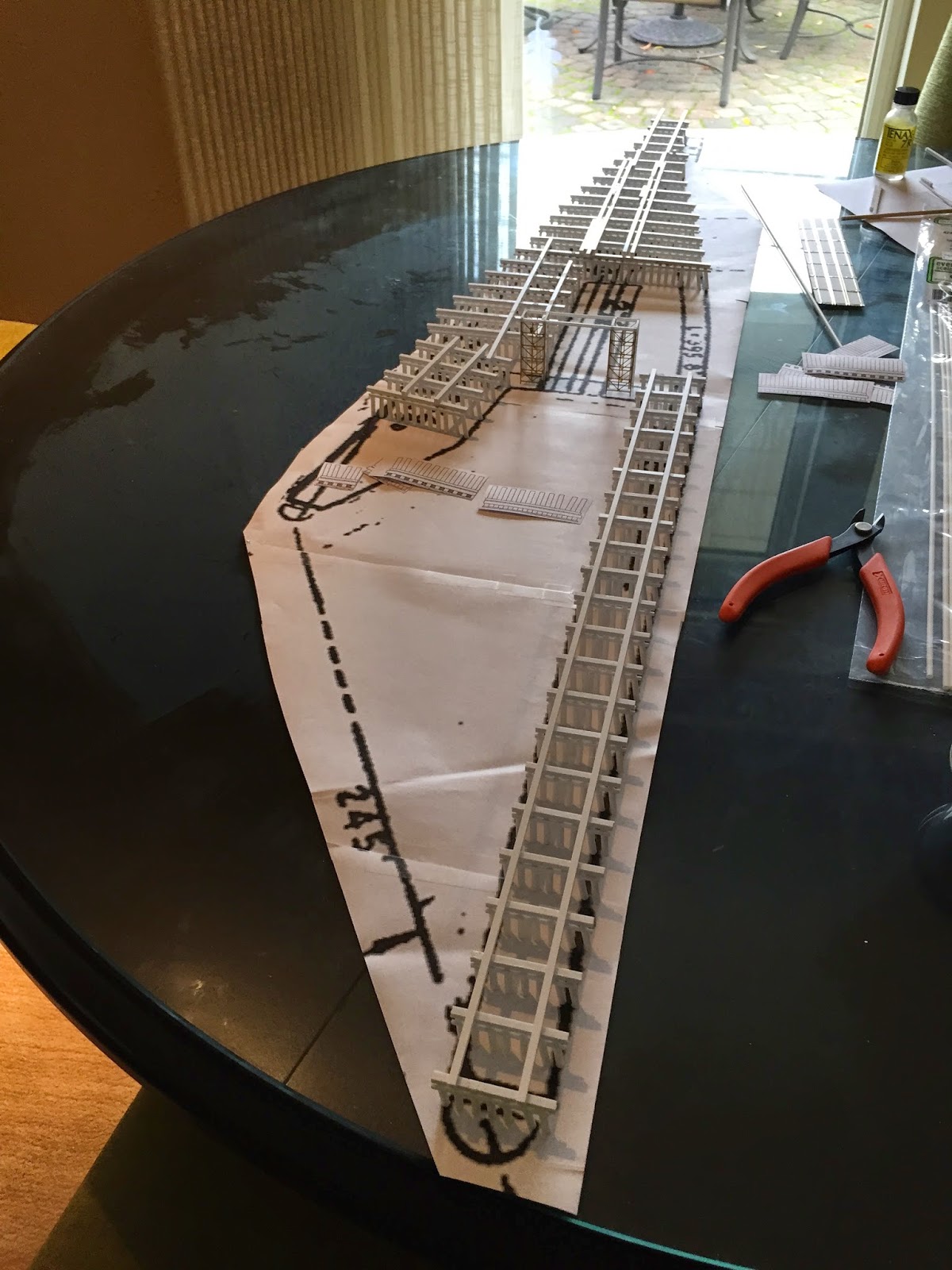 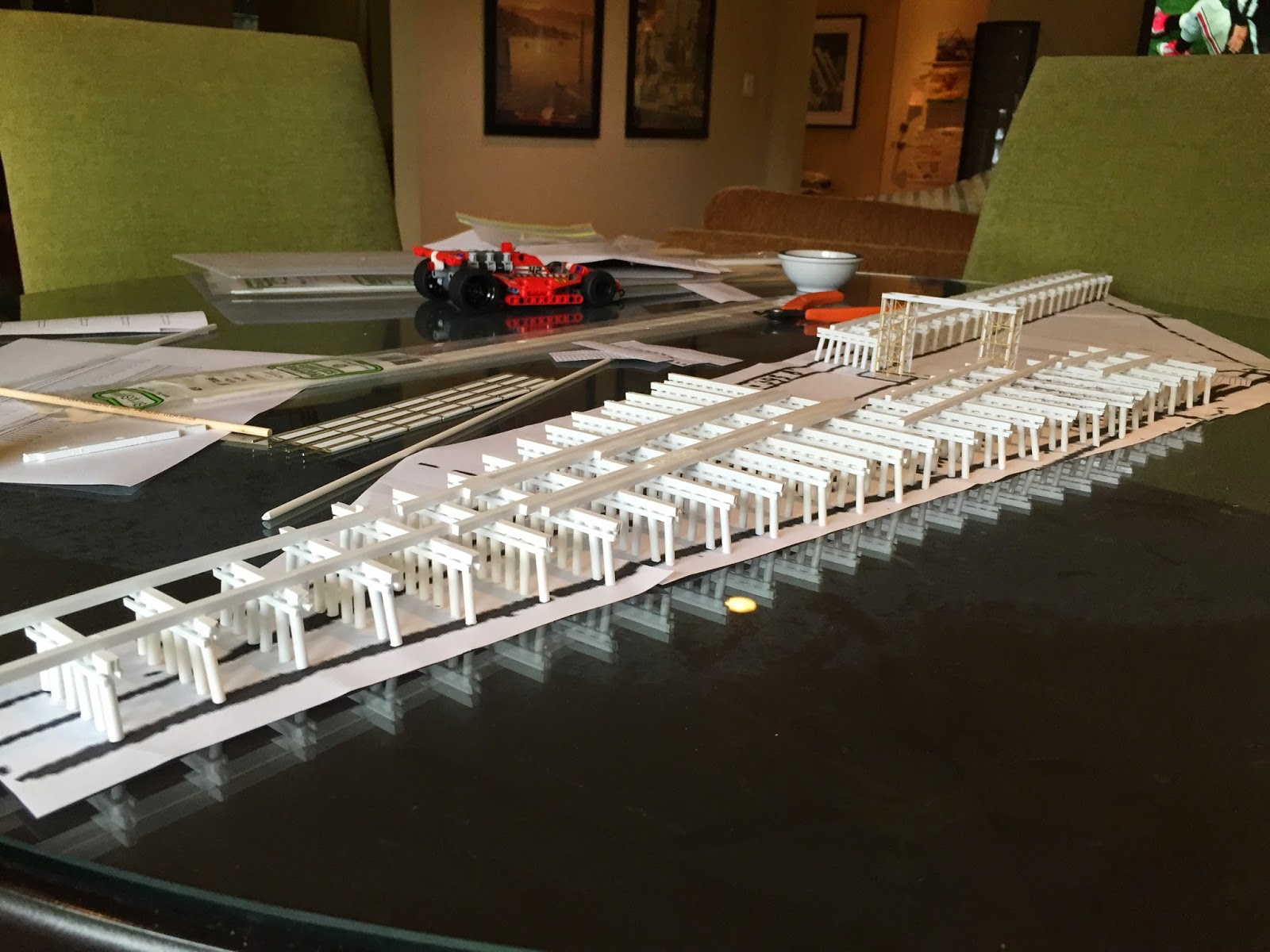 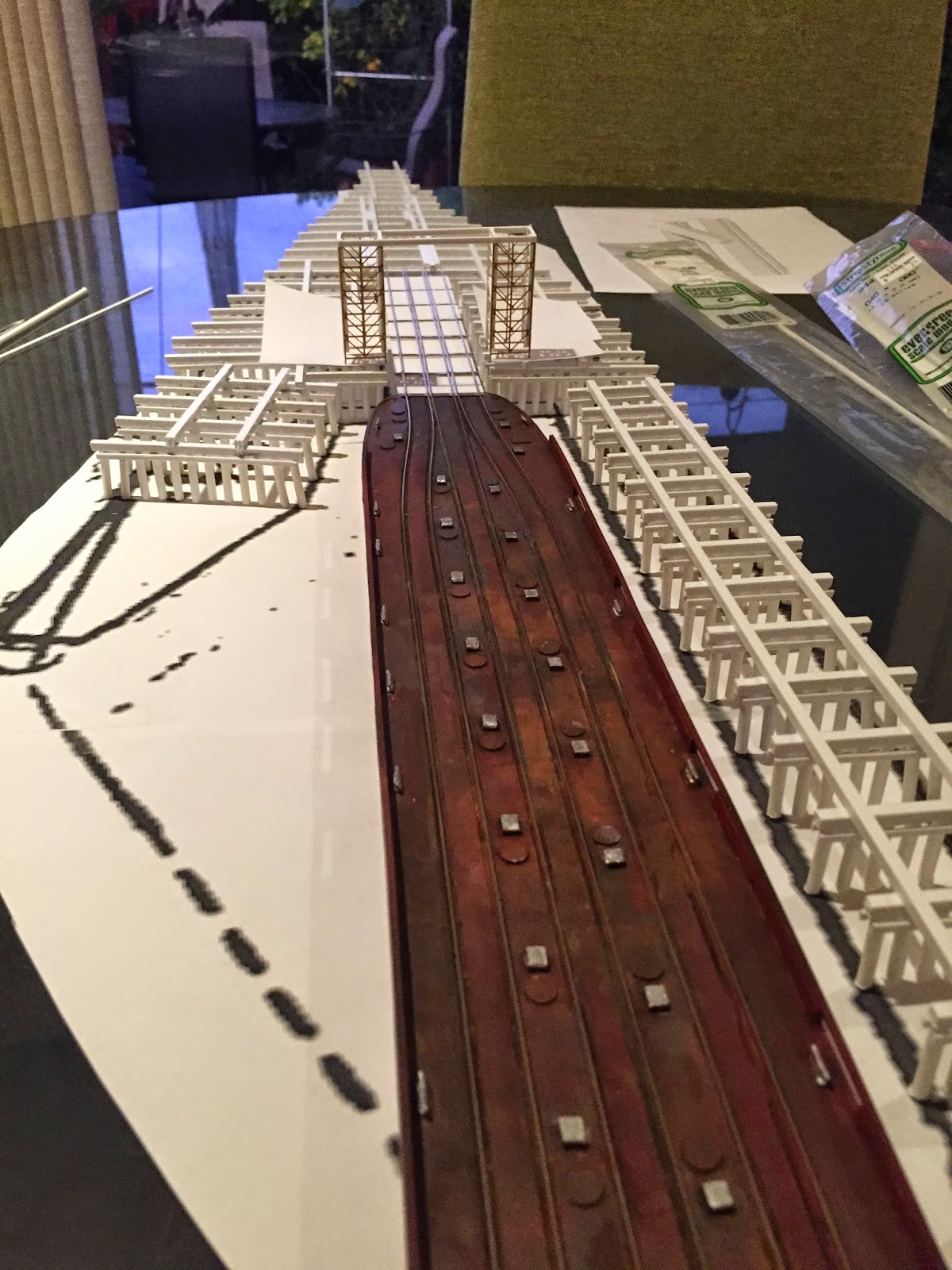 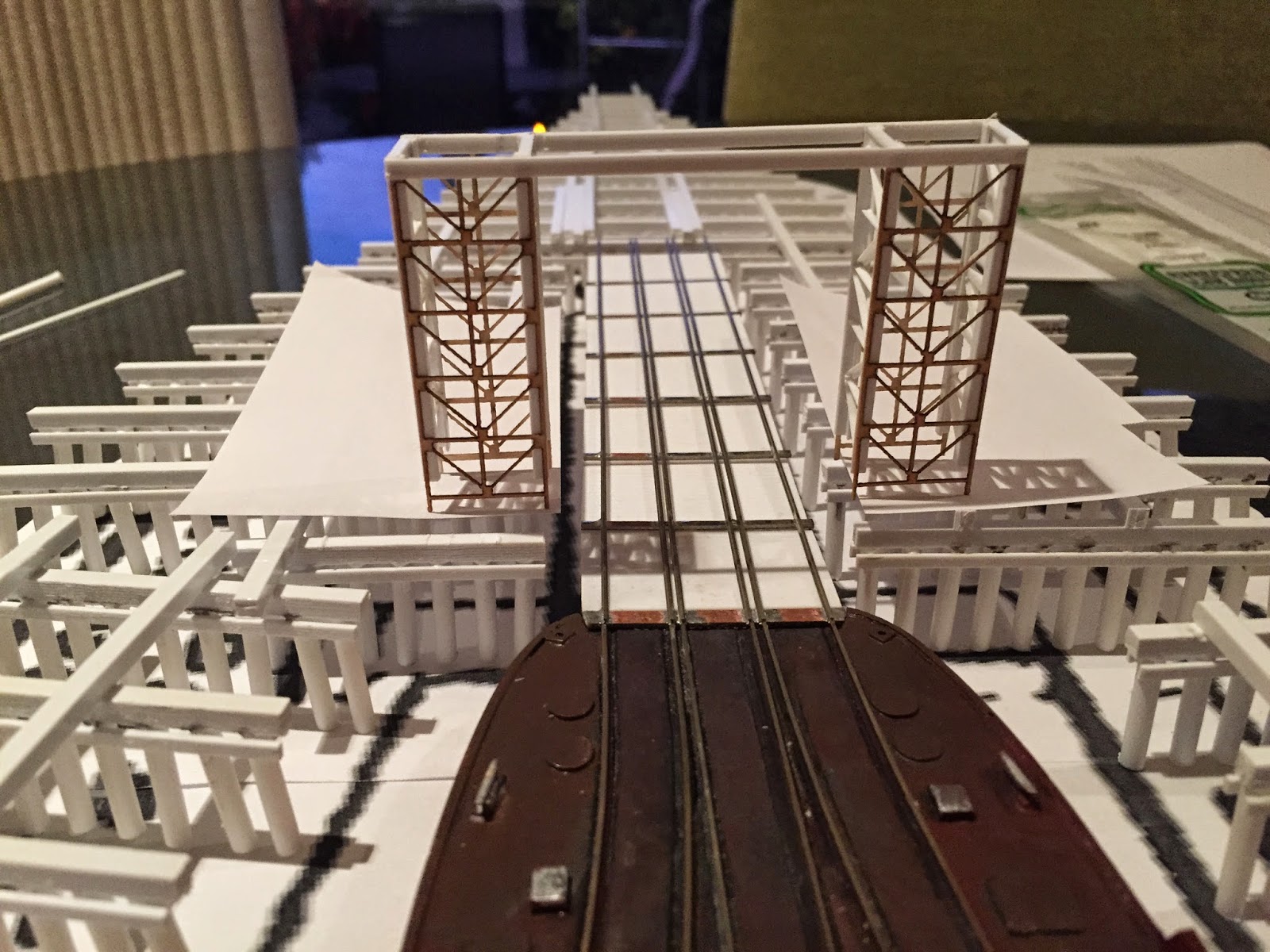 All in all, it was a productive Thanksgiving weekend— I hope to make more progress during Christmas break when I'll have more time to devote to the project again.
Posted by railnerd at 6:20 PM

Had a chance to work on paper mock-ups for the "business end" of the ATSF slip.  Initial paper models were a bit too small, and didn't have enough clearance, but after working with the "full scale" drawings and my NMRA gauge, I think I have the right "look": 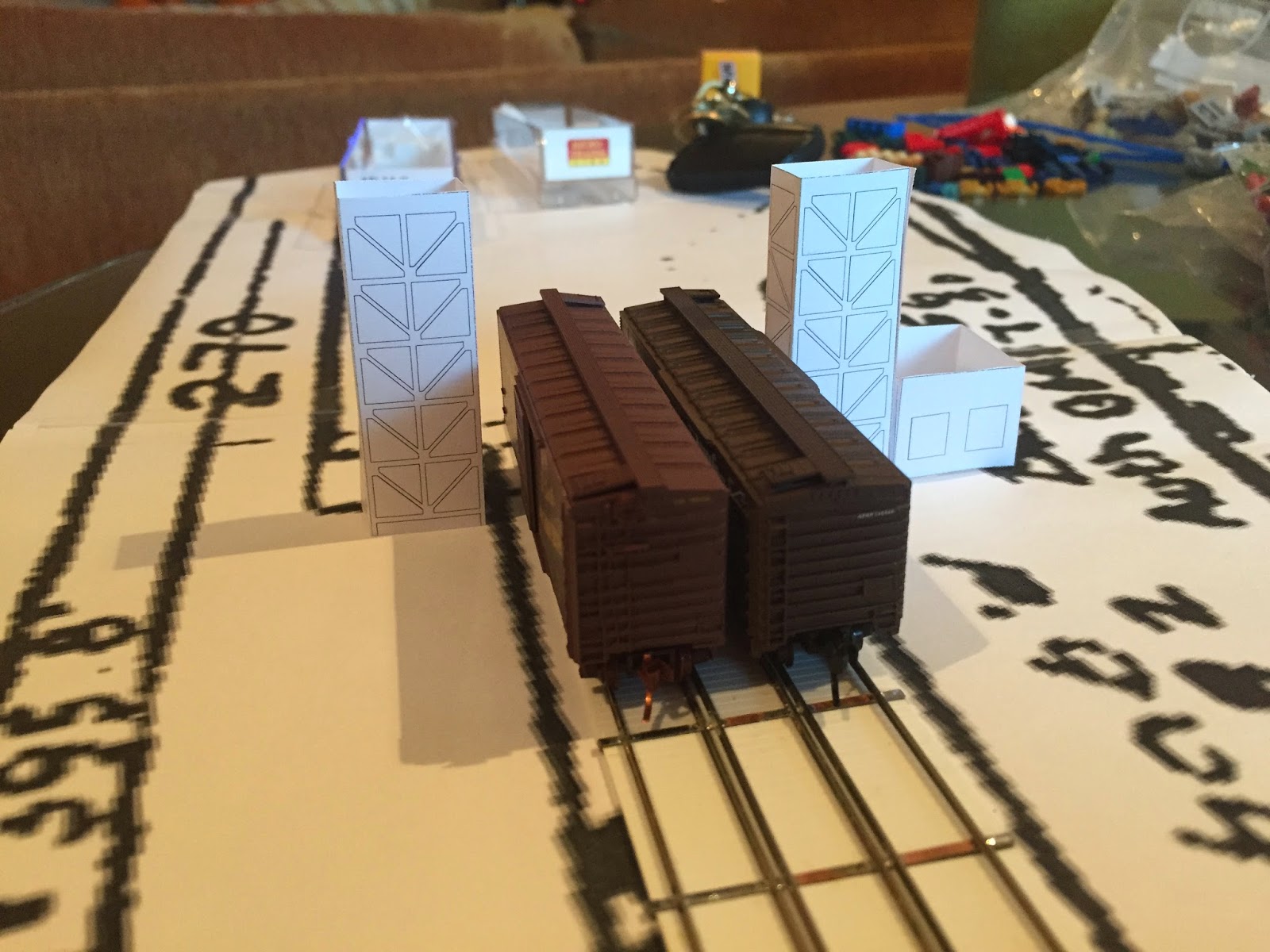 Spent some time learning how to vaporize laser board at the TechShop— it is going to take a few more hours to learn what I can get away with.  Here is a look at what happens when you try and cut things that are a bit too small: 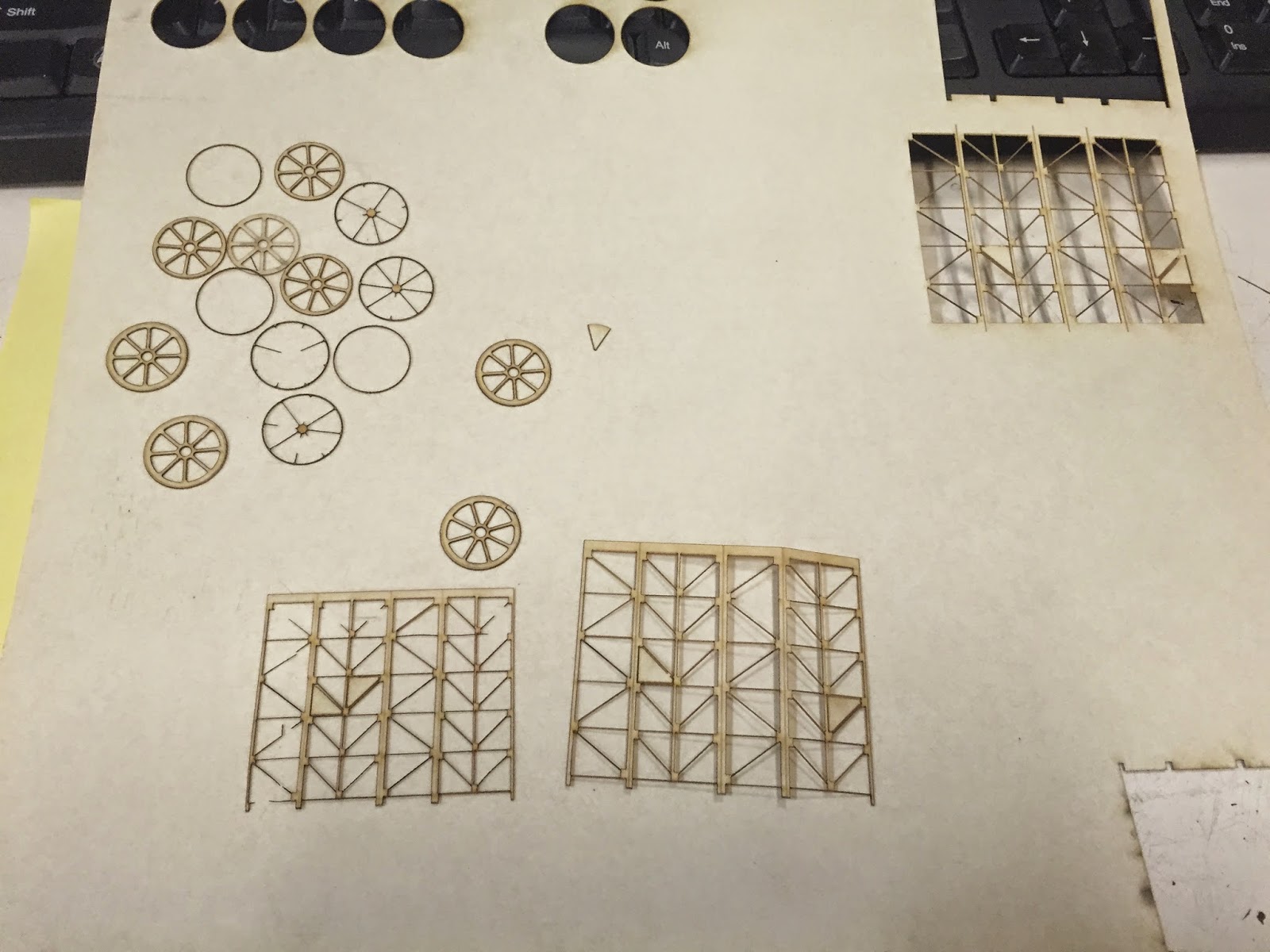 Planning on going back for more learning/punishment next weekend to dial in the settings and tweak the CAD a bit.
Posted by railnerd at 1:29 PM