One of my coworkers lives up in SF and has a nifty new drone.  Tonight I got a cool Christmas present as he took a some HD video above the former ATSF ferry slip in China Basin.  The video has already shown me things I've been unable to see from Google Earth, Apple Maps, or other web photography. Here are a few awesome screen captures: 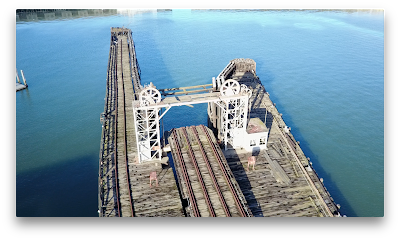 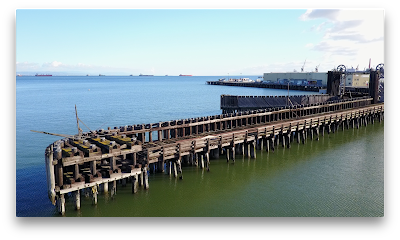 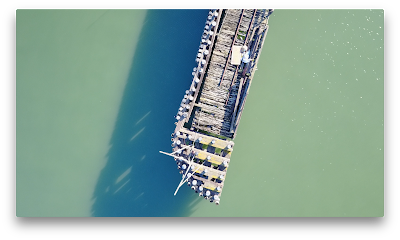 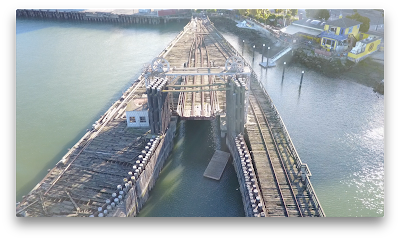 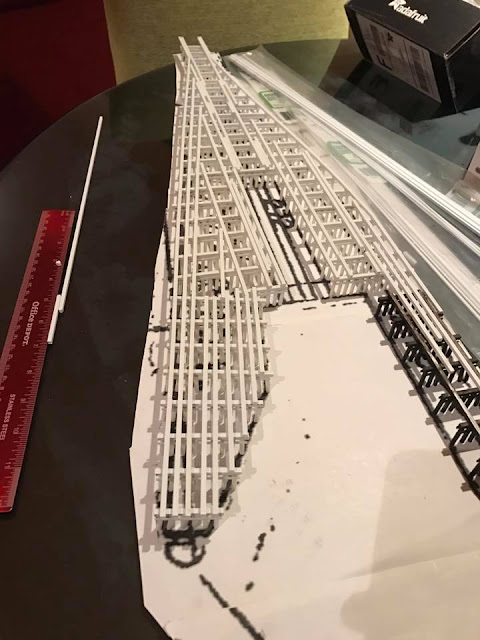 Happy with the water

Test fitting the pier atop the newly painted module frame.  I'm happy with the water— time to finish on the pier, which will involve a LOT more painting. 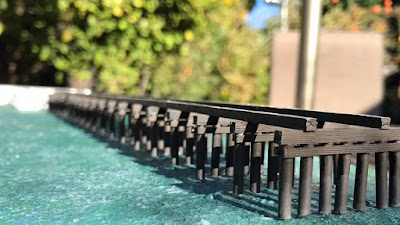 Another few coats of translucent green makes things look a lot better.  Had to extend the bay a bit, as my first pass had missed a spot.

a bit too blue

Getting the plywood down inspired me to put down some paint…  but the the first pass looks a tad too "tropical": 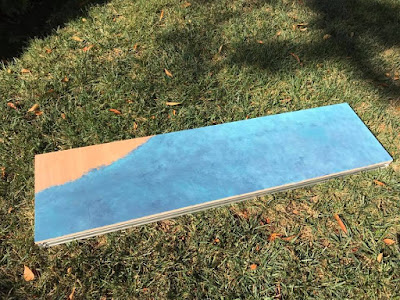 Well, at least I know that the next layer of paint will need to have a bunch more green and maybe some brown gunk mixed in.

Finally had some spare time over the weekend to add the plywood top to the aluminum framework.  My nephew was helpful and used a 3D printer to fabricate brackets, while another friend was kind enough to let me use his table saw to cut the top. 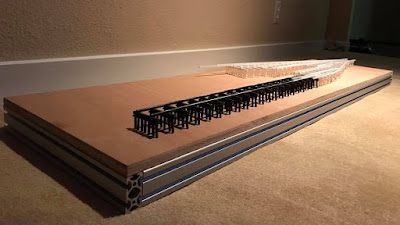 First step was to cut the t-slot extrusion to length (yes, we moved everything out of the way before we turned on the saw): 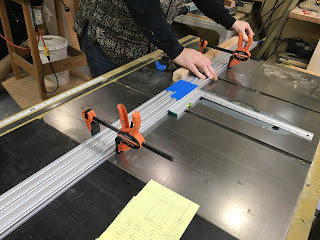 Next came some of the "erector set" pieces to join the cut strut into a frame: 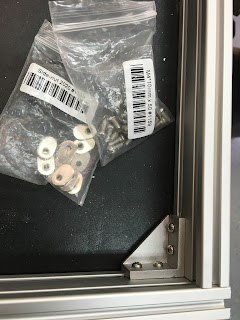 But even more important than anything else, the module frame is "Rule 0" compliant, so it will actually be available for use in a setup: 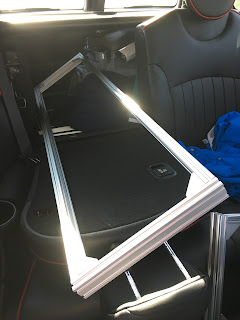 Here is a view of the underside— those blue components are secured to the sides of the module frame, and allow the top to be fastened from below: 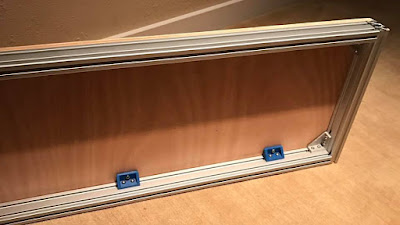 My friend just recently acquired a very nice CNC mill, and he was kind enough to oblige with a test cut.

On Thursday, I fired up 123Design and threw together a double-track spacing jig: 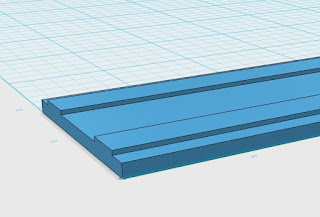 On Monday morning he handed me this: 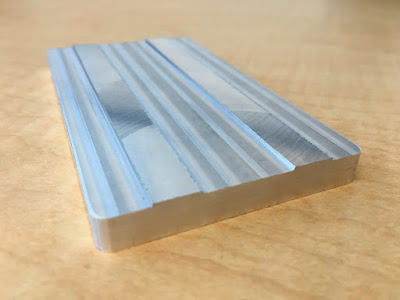 Still some rough edges, but WOW.

Back in the Saddle & Making Tracks

Back to building turnouts for China Basin.  I decided to continue to use a very tight arrangement of turnouts with the points being close to the adjacent turnout.  Track spacing in the yard will be 1.125", as I have lots of convenient Free-moN spacing fixtures.  The prototype spacing is 14', which works out to 1.05". 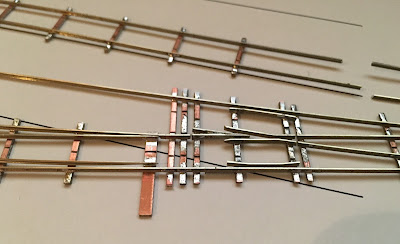 Keeping the throat compact is important to maximize the capacity of of each track.  My goal is to keep the railcars for more than one float in this portion of the yard.  I need nearly 38" of track to hold a reasonable number of 40' boxcars.  Here is the experiment that drove this home— only 8-10 40' cars fit on a single piece of ME Flex, and that doesn't include necessary clearance to avoid fouling switches.

After debating a bunch of new techniques for throwbar mechanisms, I settled upon using the heavier Clover House PCB stock to provide more surface area for silver-soldered points.  Control of the turnouts will be through the use of SPDT slide switches.
Posted by railnerd at 3:34 PM

Spent some time over break working on a new track plan that actually fits in the layout space that I have.


This layout is a "yard-centric" design, as there isn't really a traditional "road job" to be had.  One operating crew will handle loading and unloading any car ferry, whereas the second crew will handle switching the local industry and interchange with the Southern Pacific Railroad.

I expect the car ferry crew will be kept busy sorting cars on and off the car ferry, following the various loading and unloading rules.

The other crew will shuffle in and out of the interchange or industrial staging, and then work the  on-layout spots: Tidewater Oil, Western Car Loading, and Pier 50.  Western Car Loading and Pier 50 have specific positions, including cars which must NOT be moved within the session.  There is also a RIP track for ATSF cars needing repair.  When the switch crew is done with their pick-ups, rail cars will either depart the yard via the car ferry, or will be set out as a single block on the SP interchange track.  To vary the session, the crews could switch roles at the halfway point of the session.

There are four "spots" for staged trains, two representing the SP interchange, and two for SF industries such as American Can Co., or even the 25th street Western Pacific yard.

Remaining open design issues include dealing with any derailments while switching Pier 50.  The Pier 52 ferry slip is a separate "module" from the rest of the otherwise permanent layout, and may be mounted in such a way as to swing out to allow access.
Posted by railnerd at 6:56 PM